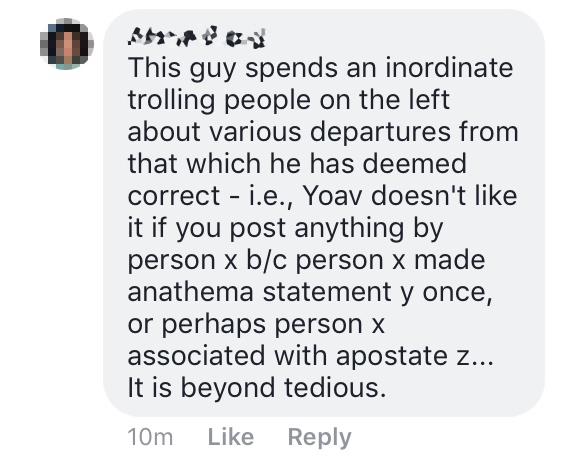 As a writer/political analyst, I focus on several topics that I believe can benefit from my contributions. These include Israel/Palestine, the arts, sciences and American politics. The combination of my education and experience affords me the knowledge and ability to add my viewpoint to debates that are constructed of many complementary voices.

My articles contain information that I have personally collected and/or researched in sources that I find credible. If someone approaches me with evidence of an error in one of my pieces and I deem it sound, I acknowledge the error and retract a word, sentence, or even entire article, if possible and necessary.

As a writer, I abide by The Golden Rule – I do unto others what I would like to be done to me; i.e. I always want to be “called out” for errors – whether in judgement or otherwise – and will happily acknowledge and rectify my mistakes if these are sufficiently proven.

This is standard etiquette for any writer who claims to endorse truth. Accountability is essential for credibility.

My principal goal is to promote positive change by highlighting and encouraging constructive forces and by “calling out” untruthful or negative ones in order to signal and discourage the spread of their toxic nature.

“Calling out” can foment growth

Journalists and analysts often “call out” politicians and other public figures for their destructive agendas, words and deeds. I have done so many times, including senior elected officials in Israel and in the United States.

Likewise, when someone shares content that is fraudulent and/or serves a counterproductive agenda, I “call it out”, which plainly means that I challenge it.

“Calling out” does not have to be unpleasant. Usually, I respectfully ask for evidence and engage in discussion via email or on social media. This typically results in constructive debate, through which myself and/or others may learn. I strongly believe this sort of exchange/conflict is essential for growth and is part and parcel of any collaborative process.

Whereas toxic trolling culture rewards those who make outrageous claims with public attention regardless of motivation, call out culture is a means of publicly challenging phenomena that is of interest or concern.

In our corrupt media landscape, in which popularity has eclipsed credibility callout culture can be used as a grassroots means of preserving truth.

Guilt by Association is not everything, but it is a lot

Politics are all about movement-building via forming alliances to foment change in a desired direction. For this purpose, it is instructive to assess one’s associations in addition to writings, speeches etc., in order to establish underlying agendas.

As any person who has written a recommendation letter, or cosigned a mortgage knows, an endorsement entails responsibility and accountability.

To claim that associations mean nothing is naive, at best. Suspicious associations are definitely worthy of questioning. Ask any detective.

In Lefty political circles, calling out toxic people and trends is especially important because there are forces that perpetuate a con job in order to infiltrate Left-wing spaces. This sort of fascist creep is nothing new, and is ongoing. With BREXIT and the rise of Trump in 2016-2017, the fascist creep has become more pronounced.

Recently, I called out three such infiltrators:

In our post-truth age of a demonopolized media, true accountability and integrity are rare. This is especially true of online culture, where popularity is valued over credibility and people can hide behind their screens, “block” others on social media and thus avoid challenge and culpability.

Recently, I was accused of “ideologically policing” someone for asking a simple question. But challenging people to be liable for their stances is not “ideological policing”. In fact, it is not fun and is quite often unpleasant – people (unfortunately) do not like to be challenged (see featured image) and perceive it as a threat to their ego, and often respond viciously when they lack an otherwise appropriate response.

In this context, call out culture has proved its utility as a grassroots weapon that can be used in the service of truth, and thus should be utilized when reality is twisted or revised for dubious personal or political purposes.

Though it hurts to be proven wrong, challenge can be perceived as an act of love and respect, and should be appreciated as such when the ultimate motivation is growth.