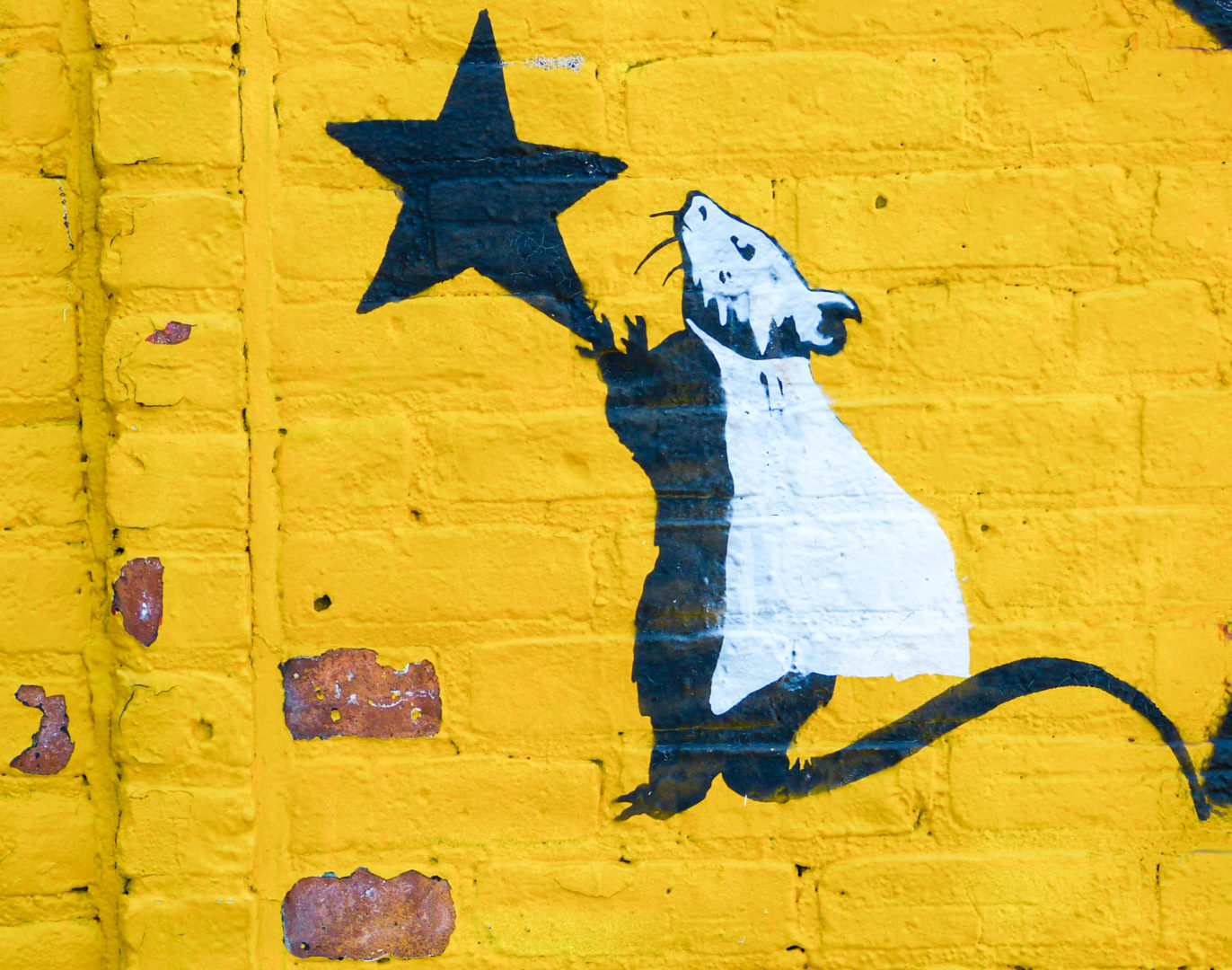 Rats are opportunistic social mammals that can adapt to – and survive in – a plethora of environments. They are skilled diggers, climbers and swimmers, have highly developed olfaction and hearing and communicate by leaving scent markings and emitting ultrasonic vocalizations.

Rats can serve as vectors for a variety of diseases. For example,  the “Black death” pandemic (aka “plague” and “Bubonic plague”) of the 14th century that killed up to a third of Europe’s population was caused by the Yersinia pestis bacteria, which was transmitted to humans by the bites of the Oriental rat flea. The infected fleas were transported to Europe from China through trade routes in Central Asia most likely on the backs of Black rats (Rattus rattus), which typically served as vehicles in a rodent-flea-rodent enzootic cycle, but were sometimes the fleas’ initial victims. Humans entered the plague’s cycle only accidentally due to a convergence of conditions that enabled its propagation.

Rats are nocturnal animals that tend to live in damp, tight and dark places such as gutters and burrows and avoid interaction with humans. As a result, rat sightings during daylight are (correctly or not) associated with major infestations. However, repeated daytime rat sightings may better indicate a diseased population rather than infestation.

Throughout the spread of plague many infected rats likely surfaced during daylight as a result of their disoriented diseased state. Dying and injured rats tend to exhibit abnormal defensive behaviors. Thus, it is likely that sick, Oriental flea-infested rats occasionally attacked humans, and were blamed for directly transmitting the plague via bites or scratches, even though the real culprits were their resident fleas.

Nonetheless, rats served a critical function in the spread of plague and have been vilified for centuries as purveyors of death and disease.

The Black Death of the 20th century

In a similarly ruthless fashion to the plague of the 14th century, the Black Death of the 20th century – Nazism/fascism – destroyed much of Europe.

But Nazism did not easily infect the German public and by extension everything the Nazi war machine touched. Nazism was able to proliferate due to a convergence of conditions in Europe in general and in Germany in particular and was normalized by its own version of rat vectors who bridged the gap between the plague of Nazism and the German public.

Nazism’s rats, Goebbels and other propagandists, had the essential role of normalizing Hitler and Nazism, a process known as Gleichschaltung, or Nazification, i.e. infection of German society with fascistic thought. This process relied on systematic smoke and mirrors that involved lying, diversion and scapegoating as a means of enabling Hitler and his Nazi party to dominate past the point of no return.

One such example of scapegoating was the Nazis’ portrayal, vilification and targeting of Jews. In an astounding case of psychological projection, Nazi propaganda created images and even a motion picture – Der Ewige Jude (“The Eternal Jew”) – which depicted Jews as invasive species that infested and plagued Europe while devouring its precious resources.

And just like the Bubonic plague, Nazism had its own enzootic cycle, maintaining a healthy population of rat carriers, while infecting and killing a minority; Hitler infamously used people to propagate his ideas, only to kill them once they served their purpose and/or became a threat. The case of Gregor Strasser who was murdered on Hitler’s orders on the purge of the “Night of long knives” in 1934 was emblematic of this phenomenon.

Fascism, the plague of 20th century Europe, had to be forcefully crushed in order to stop its global spread. All attempts to defeat it through diplomacy or attrition failed.

Since its defeat, the plague of fascism has been lying relatively dormant, restricted to local and very limited outbreaks. As such, fascism’s vectors have also been contained to their dark and hidden burrows, away from the general public, confined to esoteric publications and the dark corners of the internet.

But the years 2016-2017 have signified a rise to power of a mutated yet distinctly related form of fascism – a 21st century neo-fascism, propelled by a unique set of variables, which have enabled its outbreak.

Though dissimilar to the 20th century version in some ways, 21st century neo-fascism has many of the attributes of its ancestor. In line with Umberto Eco’s simple and useful characterization of 20th century fascism, Trump’s contemporary version has, among others, the following symptomatically fascistic attributes: (i) traditionalism (e.g. Make America Great Again!); (ii) a distrust of the intellectual world (e.g. climate change denial, unfounded conspiracies); (iii) fear of difference (e.g. Muslim ban, the US-Mexico wall); (iv) appeal to a frustrated middle class (see here, here and here); (v) militaristic elitism and contempt for the weak; (vi) machismo and; (vii) newspeak.

Donald Trump echoes a form of demagoguery reminiscent of Hitler’s in many ways. Trump’s pathological lying, his buffoonery and his anti-Semitic, misogynist and xenophobic appeal to the masses have kept people off balance and enabled his fascist creep into power.

Trump is skillfully using trial balloons to test public resistance before creating precedents that would serve to shatter acceptable taboos as a prelude to authoritarianism.

Though still incapable of fully consolidating power, Trump has been able to manipulate a corrupt and often times subservient media to serve his purposes of distraction and scapegoating, which mask his ongoing looting of the American democracy and public sphere.

What’s more, the surge of the plague of neo-fascism has stimulated an accompanying emergence of its rat vectors from their hideouts. For example, Breitbart news, a fringe, conspiracy-ridden and White supremacist haven, has been virtually normalized and mainstreamed, tragically also by figures associated with the Left.

Infiltration of Left-wing spaces is a common and insidious form of normalization of fascistic ideology, politicians and policies. Such vectors of the fascist plague – rats in sheep clothing – seek to promote “red-brown” alliances, and squash any meaningful threat from a mobilized anti-fascist Left.

Rats in sheep clothing are easier to spot if one knows what to look for. In essence, these propagandists perpetuate a con job by using pseudo-intellectual, ahistorical analyses, and ambiguous, manipulative and convoluted language to mask their underlying motivations.

Rats in sheep clothing provide the smoke and mirrors necessary for the fortification and domination of the reactionary, White supremacist, anti-Semitic, counter-revolutionary forces they champion, and will attack and ridicule their sworn enemies – anti-fascists and anarchists, from a so-called Leftist perspective.

Rats in sheep clothing will deny the very existence of fascism, scapegoat Jews and other “out” groups such as immigrants (also groups that are more sensitive to growing bigotry), convey opinions as facts, and heavily rely on a contrived “unity” to deflect challenges to their writings and actions (see here).

Finally, due to their syncretistic and often contradictory set of belief systems, rats in sheep clothing will continue the fascist tradition of psychological projection and scapegoating, accusing their enemies of their own inadequacies.

The recent articles by the writer Diana Johnstone: “Antifa in theory and in practice” and “The harmful effects of Antifa” both published on CounterPunch, are examples of this phenomenon.

The first article begins with a quote by Ennio Flaiano, which equates fascists with anti-fascists. This sort of immoral equivalency was unsurprisingly echoed by Donald Trump himself after the tragic events at Charlottesville.

Johnstone continues by denying the very existence of fascism, a word she often places in double quotes, mocking antifascists as “more inspired by Batman than by Marx or even by Bakunin”, and attributes the alarm over the American and global trend to the “ancestral fear in the Jewish community”:

“The scarcity of fascists has been compensated by identifying criticism of immigration as fascism.  This identification, in connection with rejection of national borders, derives much of its emotional force above all from the ancestral fear in the Jewish community of being excluded from the nations in which they find themselves.”

– Diana Johnstone; “Antifa in theory and in practice”

This ahistorical assessment (one of many in her piece, see here), which depicts national borders only from an exclusionary and limited uniformity perspective and not as borders of oppressive/racist/fascist regimes beyond which is refuge, contradicts the aforementioned symptoms evident in Donald Trump and his administration, blaming them on a sort of Jewish hysteria. What’s more, it denies the indisputable trend in Europe, which has plagued Germany, Austria, and Greece, among other countries.

It is unsurprising that Johnstone would protest against “criticism of immigration”, as she whitewashed the racism and nativism of the far-right French candidate Marine Le Pen before the elections in France, and even went so far as to claim that Le Pen was on the Left of the French political map (for more see here).

The reference to Jews’ “ancestral fear… of being excluded” is a regurgitation of an anachronistic, factually false and anti-Semitic trope. Nowadays, many Jews continue to be in line with the Zionist notion of nation-states and global apartheid rather than “rejection of national borders”. In fact, it is Zionist ideology itself that manipulates Jewish fear to justify its exclusivist national borders, not their rejection.

Palestine solidarity movements, including but not limited to the Boycott, Divestment and Sanctions (BDS) one, have been plagued by infiltration of Johnstone’s brand of propaganda, which masks itself as “anti-Zionist”, but is quite harmful to the Palestinian fight for justice. Notably, the BDS movement has explicitly come out against racism and bigotry of all kinds, including anti-Semitism.

Tellingly, in an email exchange Johnstone could not provide a reference for the above quote, claiming it was a conclusion that she arrived at after “a long lifetime of observation”. When probed further she referred to the activities of “influential Jews as George Soros, Daniel Cohn-Bendit, and Bernard-Henri Lévy”, and sent a reference from a “totally Jewish source”.

Finally, Johnstone’s writing continues a tradition of psychological projection when she refers to Antifa as “storm troopers of the neoliberal war party” (in “Antifa in theory and practice”). Her brand of writing serves as a vector for the epidemic of neo-fascism, which only expands on and continues the neoliberal establishment policies of its predecessors, and is now at the helm of the American empire.

The Left must learn the lessons of 20th century fascism and apply them to the rising tide of 21st century neo-fascism.

The spread of neo-fascism and the neutralization of its opposition depends on propagandists who normalize fascist ideology and enable it to dominate. In order for the Left to protect itself against infiltration of rats in sheep clothing, it must learn to detect their modus operandi, refuse to coddle them or participate in propagating their ideas. Lefty anti establishment outlets should preserve their integrity and learn from the example of the Munich Post, which relentlessly and fearlessly documented the Nazi party’s atrocities and Hitler’s dubious and duplicitous political maneuvers, up until the outlet was forced to close.

Only by keeping to principles of truth, justice and equality, and chasing the rats/propagandists back to their natural dwellings – the gutters and burrows of the media world – will humanity have a chance to survive the looming neo-fascist plague.