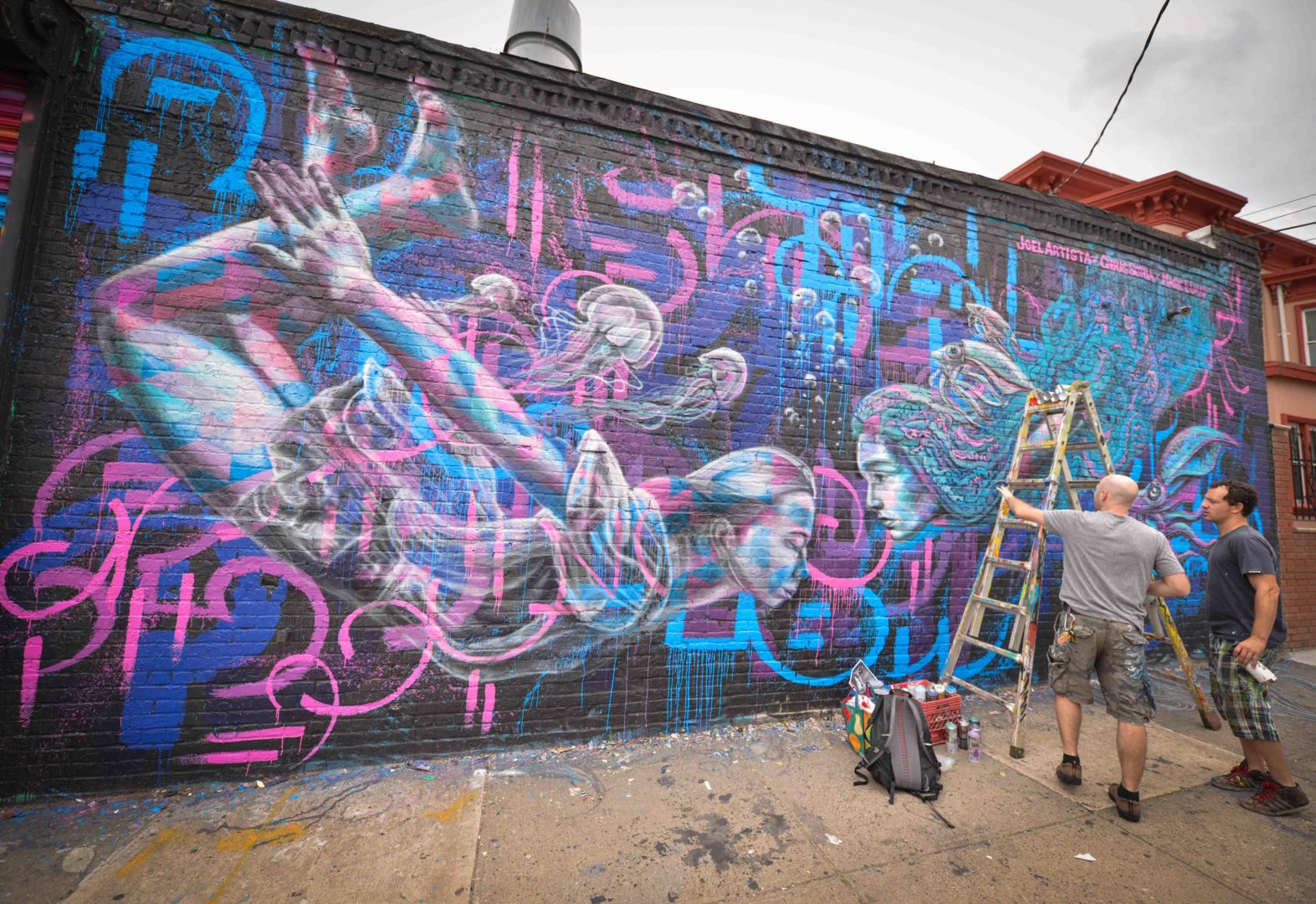 The following gorgeous mural was painted at the Welling Court Mural Project by a trio of incredible artists: Joel Bergner, Chris Soria and Marc Evan.

It is fascinating to see three independent artists collaborate with friendship and respect to produce a dynamic flow that is evident in the piece. We asked Chris about the process:

How did you guys meet each other and what made you start working together?

Chris: “This particular collabo started off with Joel Bergner and I wanting to get down on a wall together. We gel well artistically, socially, and philosophically. The wall was large enough to include one more artist, so we invited Marc Evan to get down with us. Marc and I have been friends since we were 12 years old, and collaborate regularly on a number of things from painting to pumpkins.”

What do you bring to the collab and what does your collaborative partners bring?

Chris: “All three of us are proficient in figurative mural painting, but we each have a unique style that contributes to the multifarious aesthetic of this mural. Joel initiates the wall with broad-stroked, abstract glyphs that set the tone and activate the background. I come in with tessellation and abstract formations where the figurative elements will reside. Marc weaves in pareidolia (the psychological phenomenon involving a stimulus where the mind perceives a familiar pattern of something where none actually exists, like seeing animals in clouds). Joel sprinkles in smaller creatures, like jellyfish and squid, and we all end up layering back and forth on top of each other so the elements appear interdependent. One of the reasons we work well together is that we understand and anticipate one another’s visual language and are able to faithfully layer our styles rather than having segregated spaces within the composition.”

How do you feel your work is affected when you collab?

Chris: “Using the metaphor of music, it’s the difference of performing solo versus performing with other musicians, sounds, and instruments. There’s a magic that occurs when you play with others, and it makes the experience and the artwork richer and more interesting.”

What is this particular mural about?

Chris: “We initiated the mural exploring 2 figures taking a plunge into unfamiliar territory and it gradually evolved to become an underwater scene that represented the subconscious. It’s allegorical, so it can be interpreted in different ways, but to me it involves themes of the collective unconscious, empathetic rejuvenation.”